May 13, 2015
Prof. David Wentzloff (CSE) and David Paoletti (CSE) were selected by students as Professors of the Year.

In an afternoon of food and fun, the annual department St. George’s Day Feast provided a welcome break for students in their last week of class. As part of the event, two professors were chosen as 2014-2015 HKN Professors of the Year by U-M Eta Kappa Nu, the local chapter of the national honor society for electrical and computer engineers. Prof. David Wentzloff, Associate Professor in ECE, and David Paoletti, lecturer in CSE, were chosen based on student input.

The St. George’s Day Feast is a favorite tradition among students and faculty. On this day (the Monday before the last day of classes in April), the faculty serve lunch to all EECS students. The weapons and dragon symbols on the aprons recall the original St. George’s defeat of a dragon, celebrated widely in England on April 23. The ECE and CSE chairs, Profs. Kahlil Najafi and Marios Papaefthymiou, reenact this famous tale with authentic dragon look-alikes.

Prof. Emeritus Tom Senior, who joined the department in 1957, spoke about the day’s history. Prof. Senior started the St. George’s EECS tradition in 1987, and it’s been celebrated almost every year since. 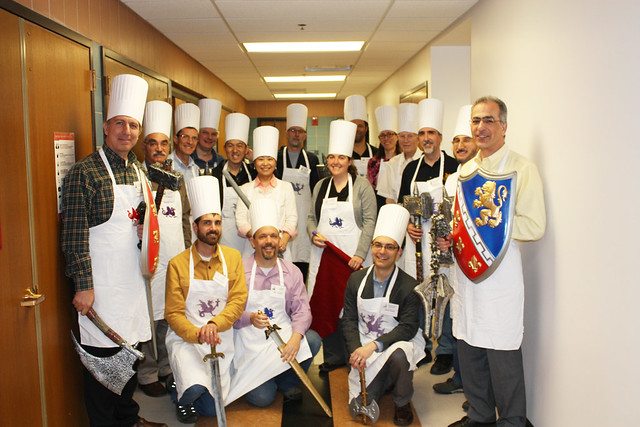